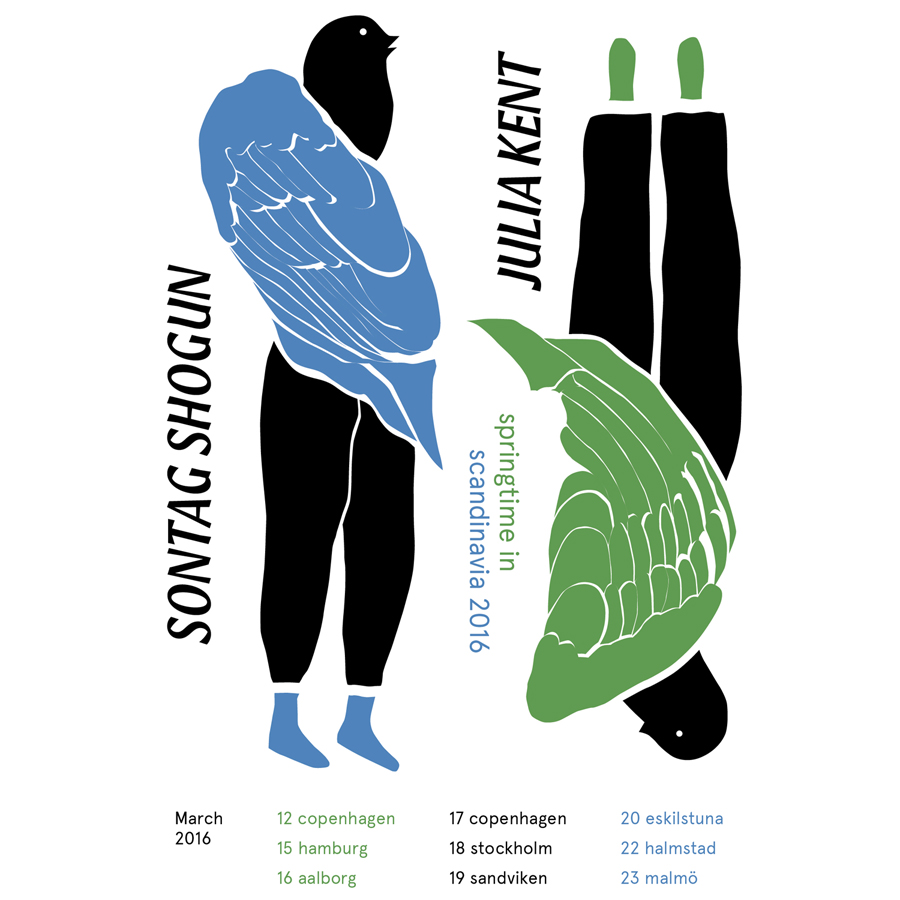 Canadian cellist and composer Julia Kent and US/Canadian piano and electronics trio Sontag Shogun (Ian Temple, piano; Jeremy Young, tapes, oscillators, piezo mics; Jesse Perlstein, laptop, field recordings) just started their Scandinavian Spring tour. They will be sharing the stage to promote Julia’s recent album ‘Asperities‘ and to present some upcoming material from Sontag Shogun. They will be performing in Denmark and more extensively in Sweden during these upcoming days – you can find the full schedule below. We spoke to Julia and Jeremy and asked them to talk a bit about their projects and the upcoming performances, so you can make sure not to miss their concerts if you live in the area! 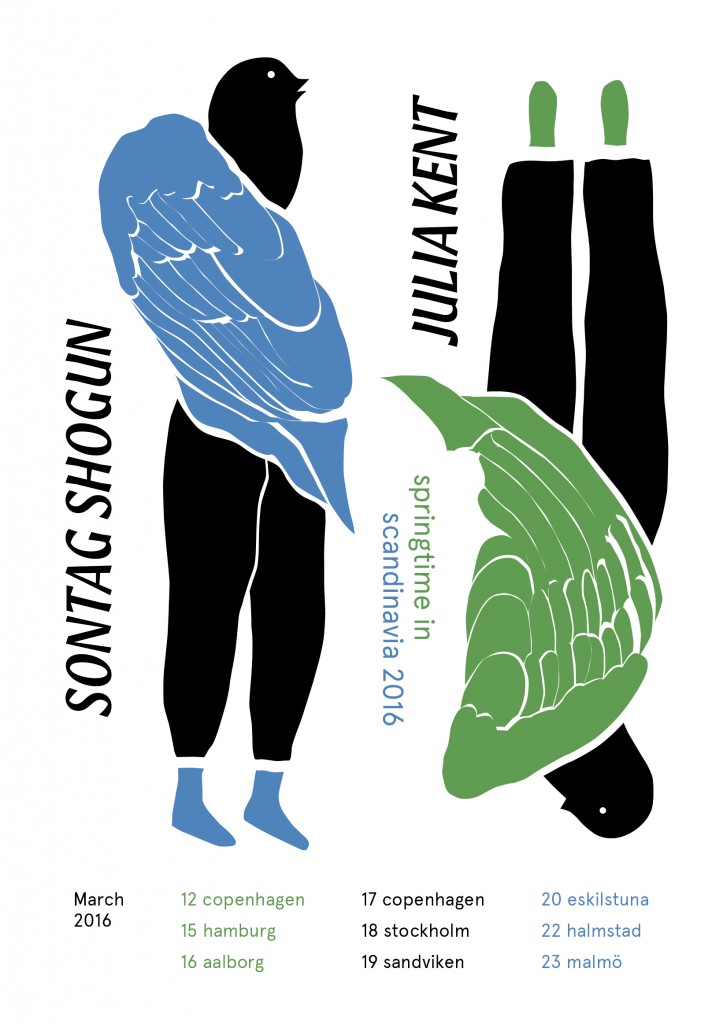 Julia, you will be promoting your last album ‘Asperities’ but will also be performing together with Sontag Shogun. What do you find the most exciting about sharing the stage with them?

Julia Kent: I like the way their musical aesthetic combines organic and digital elements and the way they incorporate classical influences into a style that is also utterly exploratory and personal.

How did you meet and decided to start working together?

Jeremy Young: Jesse curated an evening of short films with live soundtracks in Brooklyn in 2013 and Julia was one of the artists he invited. We had been fans of her music for a long time, and that night our two musical projects just fit beautifully together in the same program, so we stayed in touch. Brooklyn is a vast music scene, but it’s also quite intimate, so between New York City and Hudson we’ve shared a few bills with Julia, which typically tend to include Alexander Turnquist, Patrick Higgins (Zs) and Chris Tignor (Slow Six) as well. Julia and Chris both play strings on the album we’re currently finishing up. To really answer your question though, cello and piano! It’s the ultimate emotive combination.

‘Asperities’ revolves around modern guilt and fears. You’ve recorded the album in total isolation and usually you prefer the autonomy of working alone. Same rules apply when performing or sharing the stage with others falls into a different category?

Julia: I do prefer, obviously, to maintain personal and creative autonomy in whatever situation I’m in. Playing an instrument like cello, it’s easy to get subsumed into other people’s projects, but I feel as though I’ve paid my dues in terms of establishing myself as a solo artist and being able to choose the collaborations in which I’m involved. 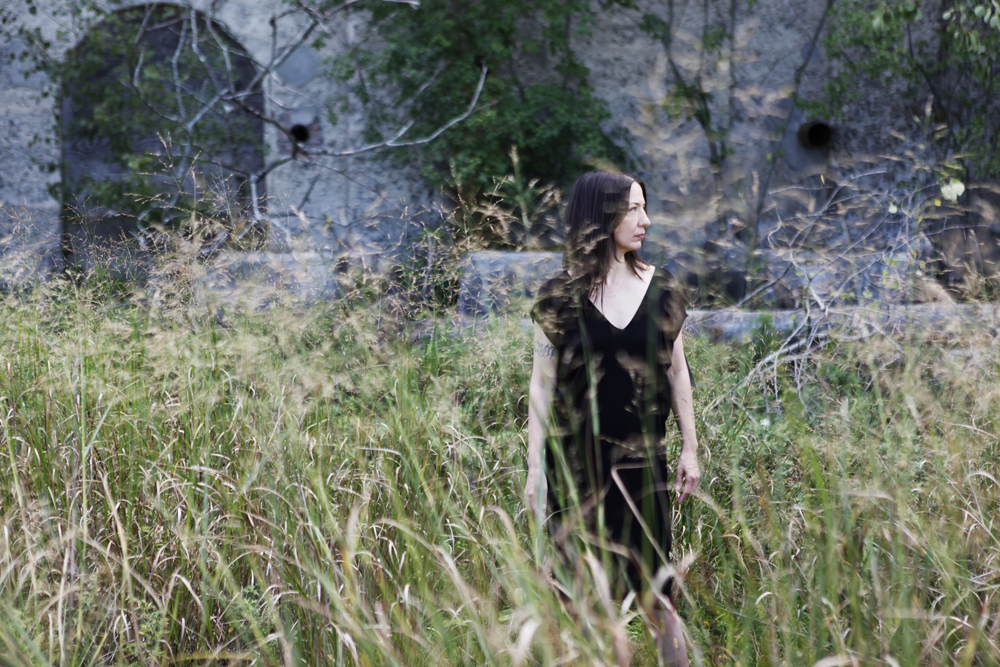 This won’t be your first time in Sweden, for example you have performed in Stockholm, at Södra Teatern before in 2009 with Antony and The Johnsons. However, this time there will be a totally different setting and atmosphere, what can the audience expect this time?

Julia: I have played elsewhere in Sweden over the years, both solo and with other people. But the concert with Antony in Södra Teatern was indeed really special and memorable for me: it was such an intimate and beautiful experience. I’m really looking forward to coming back to Stockholm and having the opportunity to present my new solo music. Performing solo for me is a way of communicating and connecting, and  I always hope that Iit can be meaningful.

You have a long period of touring ahead of you now… but what are your plans afterwards?

Julia: After these Scandinavian shows, I’m working with a dance company in Germany with whom I’ll be playing live through July, and I have a couple of other theatre projects and concerts happening in the summer and early fall. And I’ll be playing at MUTEK in Montreal in June, which I’m excited about.

Sontag Shogun celebrate 10 years of collaborating this year. How would you summarize this last decade?

Jeremy: Oh lord. Yes it’s true this project turns ten this year, which is astounding, but there’s probably a good 5 years stuffed in there where we were living in different countries, working on other projects, battling unemployment, adjusting to being in our 20s, and then of course leaving them behind. Last year was the first year we actually started describing this as a “band”, and not just a project. It’s no longer an open collaboration, Sontag has become something greater than the three of us because it makes its own rules, and challenges us in ways that are dictated by its own momentum. Although there have been a lot of interesting “eras” of Sontag Shogun, there’s always been this constant inward exploration of how to do things the hard way in performance, while making it sound effortless.

At first, we split the signals from Ian’s keyboard with no clean feed to process only keyboard signals through two electronic stations, then joining it back together in a live mix, so as to deconstruct the typical “piano trio”. After that we challenged ourselves to respond to audio feeds from 4-5 TVs, with the picture being daisy-chained from each TV eventually to a projector. I have moved from using a single-oscillator sine-wave generator to follow the melody of each piano line, to now using three-oscillator square-waves, and never with a keyboard interface, which means I have to tune each oscillator between and during each movement. We’ve challenged ourselves to seamlessly integrate practice recordings, live recordings and studio recordings into the same track without it being noticeable. We use no samplers, and make rhythms live out of amplified rice bowls, slate plates, paint brushes, chopsticks, sand and carpet instead of using drum sounds. Ian will challenge himself to write the prettiest possible piano melody over some of the scariest, most shattered soundscapes. And yet, it all seems to come together as if there’s very little effort at all.

How did you guys meet and started making music together?

Jeremy: We met in university in Montréal. Sontag Shogun began as an entirely improvised and experimental sonic project because the three of us needed an expressive outlet to counter our other band at the time, in 2006, which performed highly composed, deeply rehearsed music. We needed a project that would allow for long-form slow-change style music, since the sextet played quite fast and hard music.

At first, we never wrote anything down, and improvised to these movement-maps that would signal some kind of organic change. Basically graphic scores. After a long dormant period when we all lived in different places, we found ourselves back in New York together and resurrected the project, only to find that we had naturally shifted towards wanting more composition, more integrated structures. As a unit, we still feel that our identity is in improvisation, so the goal is to try to write sketches that can arise from extended improvisations organically. Our sets are probably 35% improvised now, and our song sketches change from night to night.

You’ve been working together in other projects and you’ve released some solo material as well but Sontag Shogun seems to have been in the spotlight.

Jeremy: We’ve all been involved with other bands and solo projects actually. I think one of the reasons we continually gravitate back to Sontag as a home base is that it is the kind of band that always combines the stuff we’re actually listening to. We are somewhere between Erik Satie, Luc Ferrari and Pete Swanson. Nostalgic piano, concrète sonic collage and saturated tape-driven beats. It’s a mess, but it works. And not to get overly sentimental, but the live performances of Sontag Shogun are a very rewarding experience for all of us, we feed off each other’s energy in a big way. So we tend to find excuses to perform together as much as possible. People have said that a trio is the best type of ensemble to perform in.

You have collaborated with a wide range of artists within an even wider range of creative fields. Other musicians, poets, choreographers, filmmakers, scentscape installation artists… What do you like the best about working with others?

Jeremy: Even the purest sine tone will have a drastically different effect on our senses when coupled with different colors of light, and the presence or absence of shadows. I think it’s incredibly important for musicians to use some form of non-audio collaboration in performance because it makes something that might otherwise be straightforward more flexible in terms of how its received by an audience. There’s something that happens in our senses, and our memory, when light and sound, or movement and sound, are combined, and it’s unpredictable, bold, scary and comforting, and beautiful. So any chance we get we try to enhance that sense of uncertainty and the passage towards the subconscious, by collaborating with dance, smell, video, photography, words and also clothes (yes, one time a clothier improvised the creation of a dress during our performance!).

We also create these kinds of sound quilts, it’s audio-collage with a very nostalgic feel like you’re digging for something lost, so that tends to lend well with other forms of abstract creative expression. But mostly we just crave working with other artists who inspire us, it keeps us on our toes!

You are doing an extensive Scandinavian tour this week and the next, many musicians’ dream! How come you’ve chosen this part of Europe?

Jeremy: Well it started with a flight deal actually. Over the summer I got an email from Norwegian Airlines boasting about a crazy deal from New York to Oslo that was like $400 round trip. We knew we wanted to come back to Europe soon, so this was all it took to convince us to come and explore this region. And while this flight deal ended up being kind of bogus, we booked early enough to get a decent fair anyway. But the longer answer is that we have had these friendships for a long time with folks like David Wenngren (Library Tapes), Bjarke Rasmussen (Grøn, Infinite Waves) and transient buds who’ve ended up in Northern Europe like John Chantler and Aidan Baker, but we’ve never played with them. So it’s a wonderful gift to finally share the stage, and work with these amazing people. Scandinavia is an incredibly special, magical place, which means the music will be strange and mysterious! 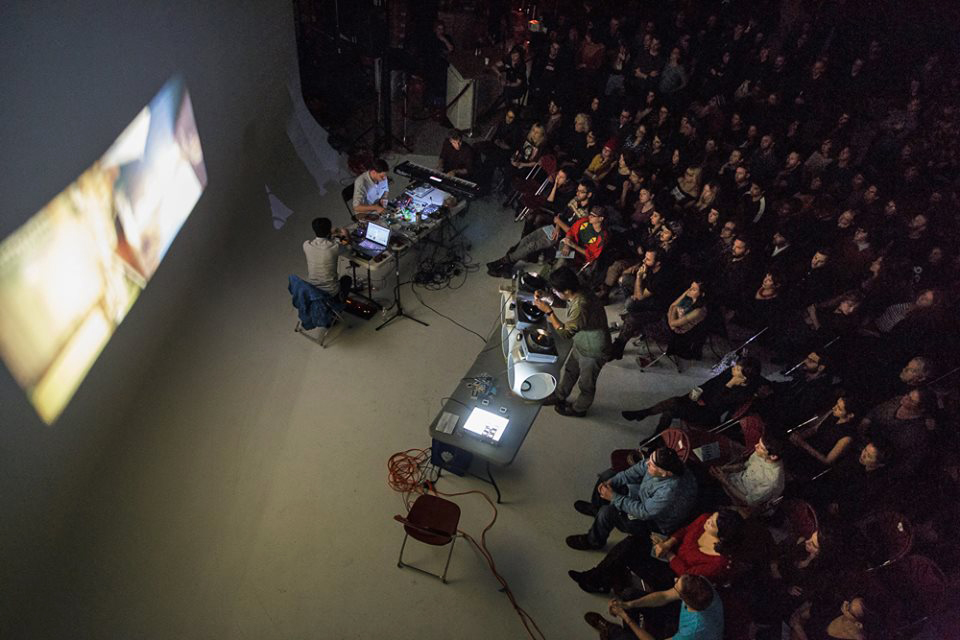 What can the audience expect if they visit one of your shows? What have you prepared for this tour?

Jeremy: Haha, well we’re really excited to share the stage with Julia on this tour. Her music is super touching, and we have always had a great time performing with her, so expect some incredible moments from her set and maybe a bit of collaboration together as well! Our music may confuse some people. It’s not always pretty, our sets tend to take naps and then awake in a new place and there’s never a singular touch point since it’s a shifting three-person collage. Each night is almost like a journey. But we create every sound live, which is fun to watch. Feel free to share your thoughts with us after the show, ask questions, tell us what resonated with you and what felt uncomfortable. That means everything to us.