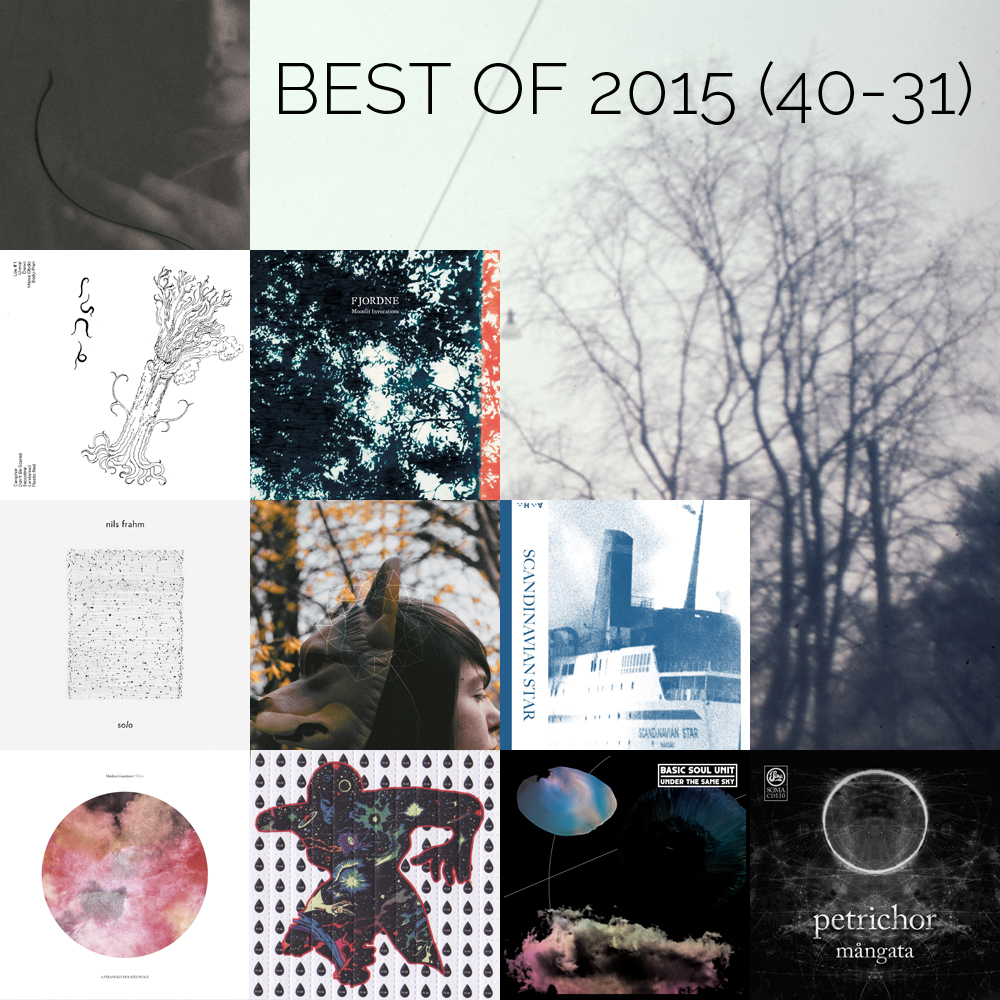 End-of-year lists became something like a plague these days. Like a constant mass of unrequested baby pictures or wedding photos on social media – you know they are coming sooner or later, but you are aware of the fact that you cannot really hide from all of them. Secretly, you also admit that eventually all this is more than okay if they make someone happy. Let it flow. It’s basically the same thing with these lists – we’ve been pregnant with these albums for at least 12 months, and now that another year is coming to end, we would like to share these experiences with you. 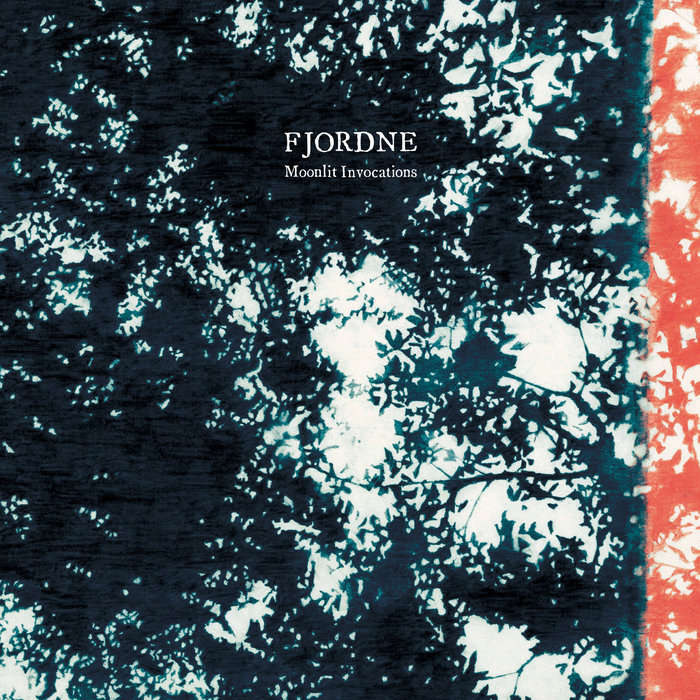 Based in Tokyo, Fjordne is the solo project of Fujimoto Shunichiro who focuses on two concepts: ‘sound texture’ and ‘twisted time’. He uses an array of acoustic instruments and transforms his sounds into a different dimension, into such a calm sphere that only the Japanese musicians are able to create. His debut album ‘Moonlit Invocations’ on Chihei Hatakeyama’s White Paddy Mountain is a lovely mixture of acoustic and digital elements, a soothing combination of the past and the future.

“Moonlit Invocations” is a homage to the 60’s jazz music. Dense structures and beautiful harmony create a soft depth to these compositions and moreover, a profound personal touch. The solo piano’s colours are the most intimate, honed to evocative perfection with each sampling jazz beat bringing its own texture. This album promises not just an aural treat but a visual experience into a labyrinth. (White Paddy Mountain)

The Californian Dan Abrams’ new release as Shuttle358 was long overdue. We had to wait 11 years to hear more of his hypnotic glitch ballads on 12k, but it was definitely worth the wait. Many of you might argue that this is not exactly where he left off with ‘Chessa’ in 2004, but we recommend to keep an open heart and especially an open ear (or two!) to take in all the subtle beauties this album has to offer: “a melancholic bedtime story; a familiar aura. A mobius strip.”

“In his most bold and experiential work yet, Shuttle358 pulls you into a highly immersive blend of cinematic loops met with warm analogue performances, fragments of long ago spools of mellotron tape, piano string plucking, hazy guitar processing reminiscent of Abrams’ Fenton project, and field recordings under the stars.” (12k)

The story of the original Scandinavian Star, which was a ferry built in France in 1971 is a tragic one. An arsonist’s fire killed 159 people aboard en route from Norway to Denmark in 1990. 15 years after the incident, the Danish Malte Fischer (also a member of Lust For Youth) composed an imposing homage to this ill-fated vehicle, which is yet another reason to keep an eye out on the tape scene. (If you needed any reasons, d’oh!) The cassette features five tracks but none of them sounds the same nor they have the same atmosphere yet they work brilliantly as a whole piece. We might discover some trance and drones, possibly some traces of rave, ambient and industrial techno. The second track, which is one of our favourites is an exciting lo-fi version of Samuel Barber’s ‘Adagio For Strings’. Not that it needed another remake but this is definitely something else.

Yet another tape and yet another underrated project: Blood Room who define themselves as ‘restaurant horror’. Sounds interesting? Jimmy Billingham’s (HOLOVR) Indole Records gave shelter for Tim Matts’ quirky technoesque-illbient mélange, which is one of the most exciting discoveries this year. However, he’s been quite active for a while with releases on Fort Evil Fruit, Hylé Tapes and Reject and Fade, and he also forms one half of three collaborative projects: in collaboration with ovis aurum as IXTAB; with Mute-Tiny as Blood Mute, and with Micromelancolie as Dstrss.

“Micro detail with macro scope and pose, claustro clicks, cuts and scrapes rub up against propulsive kicks and uncanny tonal phrases. One for the decon/recon set. Blood Room emerged whilst Tim was living and working on his Ph.D in the US, Berlin and Denmark. Beginning life as a loop-based musique concrete and plunderphonic project, early Blood Room drew heavily on film audio, which was reprocessed in line with an interest in domestic or ‘restaurant horror’. Whilst remaining tongue-in-cheek, Blood Room was and remains an extension of Tim’s interest in the relationship between habits, symptoms and repetition. Whilst the project still retains a shlock horror component, it has moved towards the beat-driven techno sound.” (Indole Records)

If you read the word Dekmantel, you most probably know what to expect here. If you don’t, we can ensure you that Stuart Li’s second full-length release is definitely a banger, a powerful collection of ten techno/house hymns. This is what Shed would be able to sound like if he would care a little bit more these days, but it’s also highly recommended for Carl Craig and Levon Vincent fans. Also, if you happen to live in Montreal and you don’t have any plans for New Year’s Eve yet, you might be in for a treat.

“Hypnotic and deep, but always funky, Li now brings his rugged house to the Dekmantel imprint for the very first time, serving up this finely crafted follow-up to his 2012 debut album. Delivering ten Detroit and Chicago-inspired house tracks of the finest calibre, Li’s offset and grubby bruk drums are a constant nod to the dance floor, while his melodies lean towards an unparalleled industrial edged emotion.” (Dekmantel)

A taste of goodness:

Fortunately it became sort of a tradition that Hibernate Recordings has got something special for us every year. Jason Corder aka offthesky (even Off The Sky) has proven to be a prolific ambient sculptor for quite some years now, providing some unforgettable masterpieces straight from the beginning (‘Cold Distances’, 2003).

“Initially conceived with the aim to create a series of piano sketches exploring mobile recording techniques, ‘the serpent phase’ takes in recordings made in Chicago, Switzerland, England, Canada, Colorado, and Kentucky. These initial recordings were then added to with other instrumentation including vibraphone, guitar, a synth, drum kit, vocals and textural field recordings. Wishing to leave any deeper meaning up to the listener’s interpretation of the music, offthesky’s atmospheric collection of pieces allows us to explore the religious, spiritual and moral connotations of dark and light periods in life.” (Hibernate)

Behind this very much Scandinavian sounding album we find Simon Stokes and and his machines straight outta Glasgow. Although the cover art suggest more of a dark ambient touch, ‘Mångata’ is a well-crafted piece of slowly unfolding ‘rose-tinted techno’, a soft glow in the darkness, the darkness itself. Recommended to take it all in in one sitting, the euphorical reward is guaranteed.

“From the crystallising intro of ‘Komorebi’ to the dying moments of album closer ‘On Tides’, it is impossible to deny the hypnotic bliss of Petrichor’s debut album. As each track melts into the next and the journey unfolds, you are absorbed into the world of ‘Mångata’, a soundscape of mesmerising beauty and ethereal texture. It’s already being hailed as one of the techno albums of the year, but to file ‘Mångata’ under one genre (albeit an increasingly diverse one) would be undermining its essence. This is a work of sonic brilliance, and it reaches far beyond the dancefloor.” (Alex Caslano, Synth Glasgow)

Nils Frahm had a very busy year. Thanks to him now we have a World Piano Day, which is falling on the 88th day of any given year. The reason for this is that a piano has 88 keys. Mark your calendars, the next date is March 28, 2016! Thanks to him we also have a wonderful ‘Solo’ album, which he was sharing FOR FREE to raise money and help build the world’s tallest piano, the Klavins M450. He also wrote his first ever, German Film Prize-winning film score to ‘Victoria’, and let’s not forget that he was also touring around Europe with the ‘Nils Has Lost His Mind Tour’. He definitely hasn’t lost it, he’s got it all together, more than ever. And he deserves all the attention.

“Recorded on the Klavins M370 in 2014 as an improvisation single take without any overdubs. The 370 is situated in Tübingen / Germany, 1.8 tons in weight, 3.7 meters high, its longest strings are about 10 feet in length. Once recorded, I began to think of ways to release the album as a gift to my fans, similarly to my 2012 release Screws. That’s when we came up with the idea of Piano Day, an official body created by a group of close friends to house various and exciting piano-related projects. The first project we revealed is the building of what will be the world’s tallest piano: the Klavins 450. With a target of 120.000 euros to reach, I’ve eased my fans into sharing their money for the project with this free release. All direct donations and a portion from any record sales will go to the Klavins 450 project until the target has been hit.” (Nils Frahm)

There was chaos and violence, a collision of dark matter and heat.

In the maelstrom, a legacy was created and a new moon born.

She left something here forever.

But amongst infinite black depths,

Have you ever thought about how the legendary impact of planet Theia could sound like? If you are familiar with Markus Guentner’s previous work on Kompakt, Sending Orbs or Moodgadget, you know that he is the perfect person to make it happen. And it sounds fantastic. Generous, blissful drones of infinity, powerfully layered pulsating rhythms, and yet another guest appearance from The Sight Below (Rafael Anton Irisarri).

“The evolution of a historic astrological moment is brought to life through a dramatic, evolving soundscape that only Markus could capture. Drones build upon swathes of light, cut by an ever-present sense of fear. The distant shine of stars puncture a pitch-black canvas, as a force gathers momentum and intensifies. Theia’s tortuous movement slowly builds in-front of you, and the inevitable moment of impact creeps closer and louder. The destruction is desolate, dramatic and beautiful all at once.” (A Strangely Isolated Place)